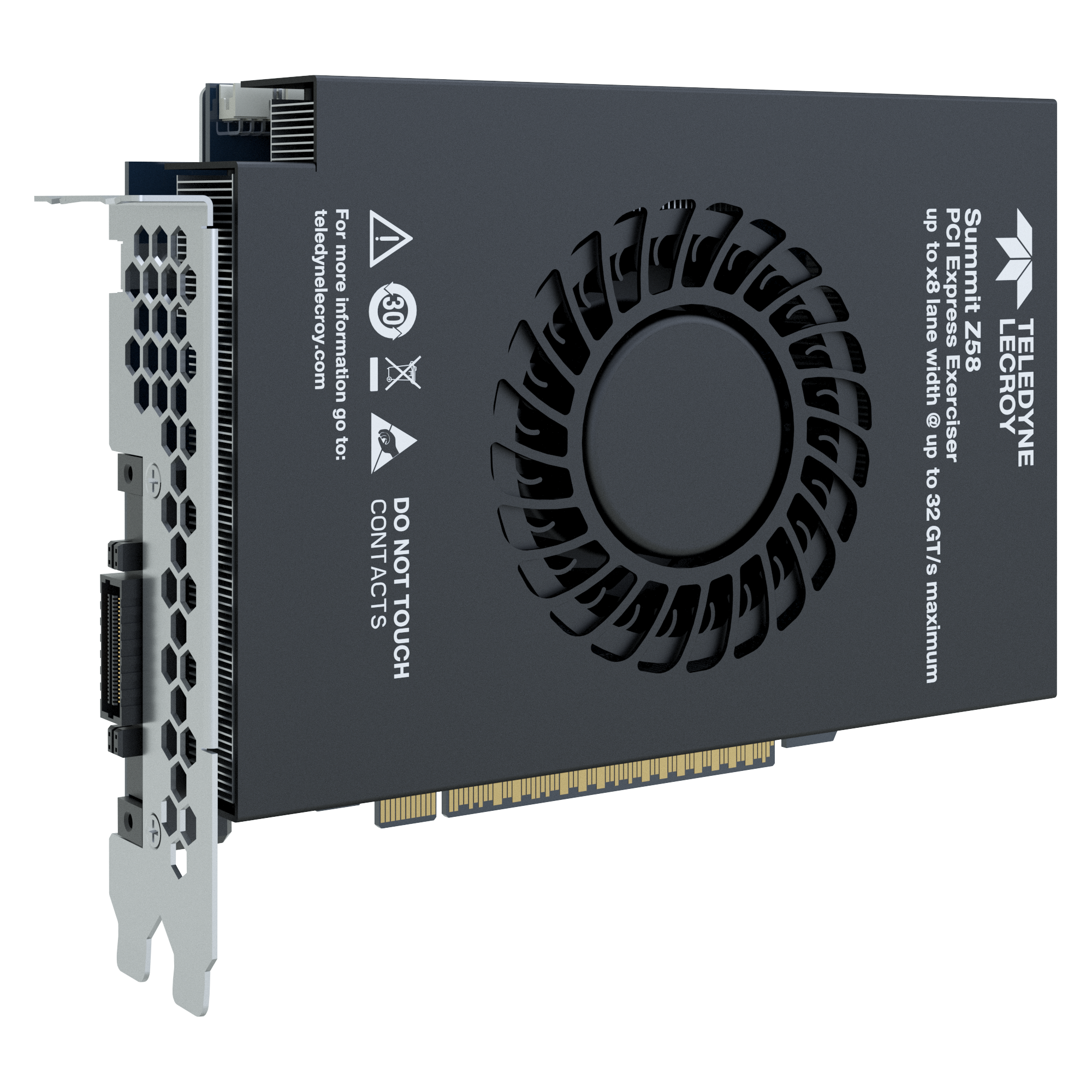 In addition to traffic generation, the system also supports protocol analysis capability, featuring the industry-standard CATC Trace as well as a wide variety of other traffic displays and data reports. The Summit Z58 supports full traffic generation and device/host emulation, as well as providing the industry a platform for development of standardized compliance test suites. In addition the system provides error injection functions to enable developers to test error recovery routines important to reliable interoperability of PCI Express 5.0 products.

A Wealth of Features

Intuitive software controls blend sophisticated traffic generation and analysis capability with ease-of-use, allowing test suites to be rapidly customized to meet specific test requirements. One feature that helps troubleshoot PCIe links is the ability to fully exercise the Link Training & Status State Machine (LTSSM) transitions. The powerful scripting language also allows for the creation of Transaction Layer Packets (TLPs) and Data Link Layer Packets (DLLPs) at PCIe 5.0 data rates of 32 GT/s. Flow Control and ACK/NAK's policies and structures can be defined and generated under user control. Features addressing LTSSM structures include providing bus traffic to emulate the all states of the LTSSM from the Detect state, to the L0 state and maintaining the L0 state between the host and device. The exerciser also supports lane reversal and can control all polarity and scrambling configurations. An important feature to note is that traffic emulation supports dynamic equalization and Skip EQ training and can handle autonomous speed switching between all combinations of speeds. The exerciser also has the capability to perform error injection for training sequences, as well as standard traffic, both at the packet level and on a per lane basis. Packet fields not explicitly specified by the user are generated automatically (such as packet numbering and CRCs). The configuration space can be emulated for any device including endpoints, bridges and switches. Support for all PCIe 5.0 data rates allows the Summit Z58 to produce test cases that test the device's ability to auto-negotiate data rates with other devices. In addition, the ability of the Summit Z58 to produce a wide variety of programmed traffic allows the user to introduce controlled error conditions. As an example, a trace file captured in the Analyzer can be exported and used as the basis for a test script, with selected programmed errors, introduced at critical stages to test the device's ability to recognize an recover from error conditions. This allows for detailed testing of simple error recovery and complex multiple error conditions, creating more resilient products that perform well even under less than ideal conditions.

The Summit Z58 can also support up to eight (8) lanes of protocol analysis. Using its high speed trace memory (up to 8 GB), the Summit Z58 can monitor, capture, decode and analyze PCIe protocols with data rates up to 32GT/s (Gen5). The application display is highly configurable and can be modified to most users' debugging styles. Many features are available including a hierarchical display, protocol traffic summaries, detailed error reports, timing calculators, bus utilization graphs, and the ability to create userdefined test reports allowing developers to troubleshoot intricate problems and finish their projects on time. PCIe storage decodes such as NVMe, SATA Express (AHCI and ATA), SCSI Express (PQI and SOP), TCG (Trusted Computing Group), Precision Time Management (PTM) and virtualization decode such as Single and Multi-Root I/O Virtualization (SRIOV and MRIOV) as well as Address Translation Services (ATS) are available to broaden its capabilities to many different industry segments.